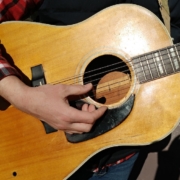 An artist’s connection with his instrument can almost be likened unto a spiritual bond in which artists can learn a lot about themselves based on the instruments they choose to play. Just ask Willie Nelson. “When Trigger quits I quit” Willie has touted instrument the past. Never mind the fact that Trigger buzzes and has an extra sound hole (you really shouldn’t play a classical with a plectrum, Willie).

Personally, I have owned hundreds of instruments ranging in price from $35 to $17,500.It is a sickness really—acquiring instruments only to become dissatisfied with them and sell them later.It usually goes like this. I’ll hear of an instrument, either new or used, that has received rave reviews. I go to play it and find that everything that has been said of the instrument is absolutely true—it sounds great and plays like butter, but in most cases I find that I do not experience a connection with it. On the rare occasion that I have a weak moment and do wind up bringing an instrument home with me; it usually winds up for sale inside of a week or two if I don’t soon experience that bond.

I have learned that one might have preferences regarding nut width; action; spacing at the bridge; d shape, c shape, or performance neck; etc., but when you get instruments in your hand you either connect with them or you don’t. All of the specs go out the window if the guitar doesn’t speak to you. If you do experience that emotional connection, it feels like a part of you, like an extension of your own arm.

In the recent past I had been a huge spruce/mahogany, pre-war, forward-shifted, scalloped X-braced Martin dreadnaught fan. Not wanting to take out a mortgage-like loan to acquire one, I went online and bought a brand new Blueridge BR-140a, an exact copy of the aforementioned holy grail of Martins. The day came when I received it in the mail. I opened the case, began strumming, and found not a thing to complain about. It is still probably the best dread I have ever owned. Sweet highs, deep bass, played like a dream, cut through a bluegrass jam like a champ. It had it all but I sold it anyway. My search continued. After all, I hadn’t married the thing so why not have another fling?

Then last April, after a Lenten fast in which I prayed that God would free me from my perpetual instrument discontentment, it happened. I found it, or perhaps it found me (I still haven’t discerned that yet)—a 1954 Gibson Southern Jumbo. When I saw it, it just called to me. “I was made for you and you for me.” I knew this before I even played it or picked it up. Four hundred dollars later it was mine. Condition, you ask? Logo missing, finish stripped, bridge and tuners replaced, pickup removed leaving a “bullet hole” appearance in the top of the guitar, numerous repaired cracks and cleats (so much so that I’ve named him Cletus). I’ve had guitars that sounded better, played better, or were more “collectable”, but my relationship with Cletus is almost sacramental.

As you can see, cost is not as big a factor as you would think in all of this. My Uncle Junior is the only man I know of who has owned more guitars than I have. Time for a haircut? Time for a new guitar—that’s Uncle Junior’s philosophy (of course he also cuts his own hair, so….) He’s not exactly picky. He only has one criterion—the guitar must only cost around $100 or so (and a decent bass response helps). No guitar stuck with Uncle Junior quite like his legendary Yamaha FG-180; he owned it for over five years .Yamaha FG-180s are legendary due to their stability, sound, and low cost. However, Uncle Junior’s example is nearly unrecognizable as the legendary model that it is. The logo is missing, it has had numerous repairs to the headstock and heel, and the bridge and saddle are almost non-existent.Worst of all, however, is that it has endured all of Uncle Junior’s normal modifications—he slimmed down the neck and made it a speed neck, he removed all of the finish, and he sanded what was left of the saddle with a brick (he doesn’t own sandpaper), as well as other unmentionable and detestable desecrations. Uncle Junior loved his Yamaha and made it entirely his own. He traded it to me about a year ago. Must be time for another haircut.

The instruments with which you experience a spiritual bond can teach you a lot about yourself. I like old beaten up and cast off things. I don’t like new things, fakes, posers, or copies. I’ve often found myself drawn to people of the same ilk. For Uncle Junior, a few major repairs are OK even if they are not well executed. He likes guitars that have seen hard times, and a few modifications don’t bother him. Also, his guitars usually stink a little bit (what does this say about Uncle Junior?)

What is your connection to your instrument? How would you describe it? What about it calls to you?Comment below on what your instrument has taught you about yourself.

Want to join the discussion?
Feel free to contribute!