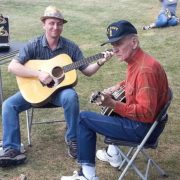 Playing music is a passion for many, but only a few make it a career. For many other musicians, they know all about the power of music to move people, build connections and break down barriers, but they also know they shouldn’t quit their day job.

These are the kind of students who will find support from a unique new Frostburg State University scholarship. The Buckheit-Ketterman Family Scholarship is open to full-time FSU students with a 3.0 or better GPA who play a musical instrument, but there’s a catch: Students majoring or minoring in music are not eligible.

“For everyone in my family who played, it was always on the side because they loved music,” explained Lynn Ketterman, development research analyst for FSU’s Office of Advancement. “There are so many students out there that don’t want music as their major, but it’s a big part of their lives.”

Lynn founded the scholarship with her husband, Dr. Jesse Ketterman, whose families are united in a love of music. Lynn’s grandfather was an organist, as was her mother. Her father played several instruments. Her brother plays bass guitar. Jesse and his Uncle Billy play banjo, and they regularly entertain patients at a nearby nursing home. Ketterman family reunions even feature a family band.

That shared love of music helped guide the award criteria, but the Kettermans also drew inspiration from the FSU student who taught Jesse to play banjo more than a decade ago.

“I want to help the student like Frankie Revell,” Lynn said.

Revell earned his degree in communications in 2005 and now works as the pastor at LaVale United Methodist Church, but music remains a major part of his life.

An eight-time Maryland State Banjo Champion, Revell learned traditional Appalachian styles from his father and grandfather, passed down through the generations. Yet when he first enrolled at FSU, his grandfather had just passed away, and Revell wasn’t sure if he still wanted to play after losing that inspiration.

When he saw an announcement for a talent contest a couple of weeks into the semester, Revell fetched his trusty banjo. The banjo helped him win the contest, but the surprise came when he saw how it helped him connect with others.

“About five people stopped me on the way to my dorm,” he said. “The minute people understand that I play the banjo, it opens a whole new conversation and a whole new door.”

The music also kept him connected to his own family. For many years, Revell played with his father, Fred, and Uncle Junior as the Lickety Split Banjo Boys. About five years ago, however, Revell’s father was stricken with Alzheimer’s disease, which quickly began eroding his memory, but not his musical ability.

“He could still play the banjo even in the very, very late stages of the disease, when he remembered very little else,” Revell said. “We would play shows, and that really helped to keep him going. … It was healing. He was himself when he had the banjo in his hands.”

That’s part of the power of music.

“It’s an inspiration. It really helps you through the hard times. The banjo is a very happy instrument, and Appalachian music is a derivative of the blues. It’s about hard times,” Revell said. “Music to me is healing, and it’s powerful.”

The Kettermans understand that music is important to many Frostburg students, and they hope the scholarship will reinforce its value as a life skill.

In Revell’s estimation, beyond helping students avoid debt, the award will do just that.

“Very often, when you’re not professional, you’re playing for free and you get the sense that people don’t really value the music,” he said. “(A scholarship like this) would have added value to the music for me.”

The first Buckheit-Ketterman Family Scholarship will be awarded in the fall of 2018. Recipients will even get an opportunity to show off their talents – they also receive a standing invitation to play the annual Ketterman family reunion.

For more information about supporting scholarships at FSU, call 301-687-4161 or visit www.frostburg.edu/foundation/ways-to-give.

Want to join the discussion?
Feel free to contribute!